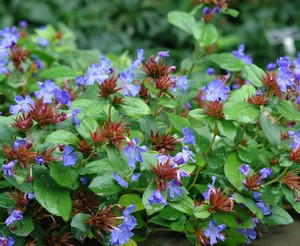 Click thumbnails to view. Scroll over image to zoom. View All Pictures

Also called Leadwort, Blue Plumbago has true blue flowers from mid July through frost. Summer foliage is dark, shiny green. During early fall the leaves turn cranberry red, while the plant still produces its blue flowers. This is the only plant we know of with this flower and foliage combination. Blue Plumbago is late coming out of dormancy, often not appearing until June 1. Grows as a low, trailing plant 6-8" tall by 18" long, pretty on a bank, draping over a wall, or mass planted as a groundcover. Super versatile, can be used in full sun to mostly shade. Hardy to zones 5-9.

This product hasn't received any reviews yet. Be the first to review this product!

Web Design in Warsaw, IN by 1Eighty Design