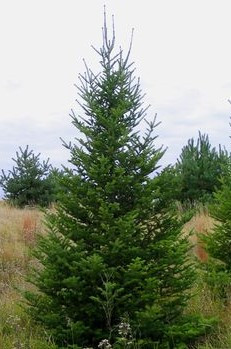 Click thumbnails to view. Scroll over image to zoom. View All Pictures

Canaan fir is a subspecies of balsam fir native to higher elevations of the Canaan Valley of West Virginia. Very similar in appearance to other balsam firs and to Fraser fir, the Canaan fir is an attractive medium sized evergreen tree growing 40-55 feet tall by 20-25 feet broad. Forms a dense pyramidal canopy with a tall slender tip. Deep bluish green needles have a silvery band on their undersides. While some trees have open, regular spacing of straight needles, others exhibit shorter needles that curve upward around the branches. Grows best in a moist, well-drained site but will tolerate wetter soils than Fraser fir. Buds break later than other varieties of balsam fir and provide greater resistance to spring frost damage. With its tight narrow pyramid shape, this stately tree can be used as a landscape specimen, in a group planting, or for screening. Hardy to zone 4.

This product hasn't received any reviews yet. Be the first to review this product!

Web Design in Warsaw, IN by 1Eighty Design